After my filament tangle and snapping incident printing the Octopus I started printing the great looking minimalistic spool (thing 8472) by whosawhatsis when half way through the print some odd noises started to happen and then my X axis Flexi-drive snapped. 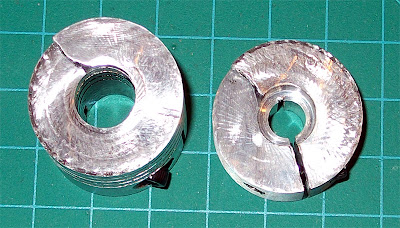 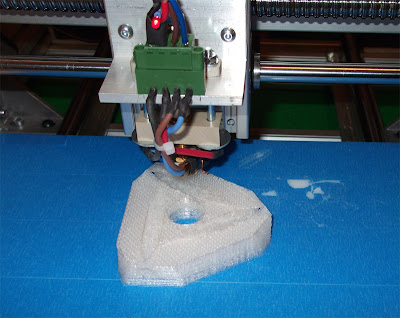 I was just about half way through the print when it happened, I shut the machine down and investigated. 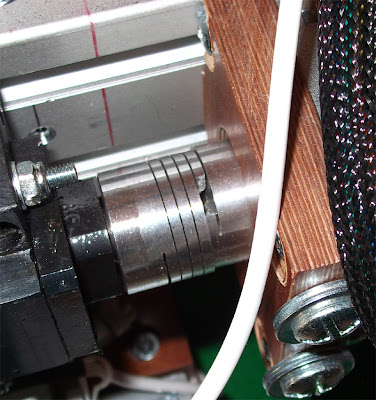 Just after it snapped. 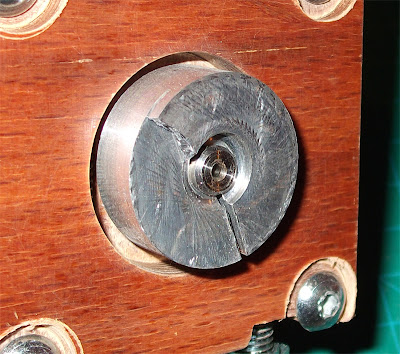 I found a photo of what is looked like before it snapped and the only thing I could see were two of the flexi-compression rings seemed to be very close together and the whole flexi-drive looked compressed.
So I expect that it was under some strain and eventually failed.
I still don't really know why it snapped. I'm not using acceleration so maybe along with the NEMA23 motors running with 24V  I'm pushing my machine too fast and hard?
I had a spare flexi-drive so I fitted that and used washers to space the motor out to give better alignment and a small silicone pad under the motor mount to allow some freedom for any oscillation, I hope this will not make the problem worse, time will tell if this happens again or maybe I was just unlucky with a weak part? or it was just the bad motor shaft alignment.
Not wanting to waste a good hour of printing I wanted to restart it, so after a height measurement of the part I concluded it must have failed around Layer 62, so a quick edit of the GCODE to start at layer 61, I re-started the print, the first layer bonded well with the last and it was off again.
The print finished later with no other issues and part is usable if not a little out of alignment where I nudged the opto-switch when taking the motor off.
I also checked the Y axis motor mount and that looks fine, so I hope this was just a one off event.
I will print the Filament mount arms tonight and hopefully assemble it, that will be the first useful thing it's printed and it should allow me to leave the machine for longer without worrying about filament tangle.
Thanks to whosawhatsis for the great model, I'm sure this is going to look great on my machine.
Rich.
Posted by RichRap3D at 16:39