During the summer I decided it would be good to upgrade the electronics in my E3D BigBox. I had already made some modifications adding extruder expansion to the RUMBA and experimenting with a over-complex automatic tool-changer system... more on that soon.

I was about to order a new electronics set, when the Think3D-Print3D team contacted me to see if I would be interested in looking at a beta version of their new Duet Wifi 32bit ARM RepRap electronics. 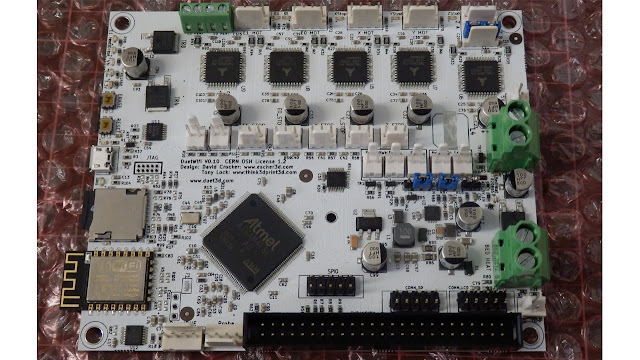 Obviously I was thrilled to take a look and I had an ideal machine in the BigBox to test it out.
Not only that but I also got the chance to try out the full colour 7" touch-screen for the DuetWifi too. 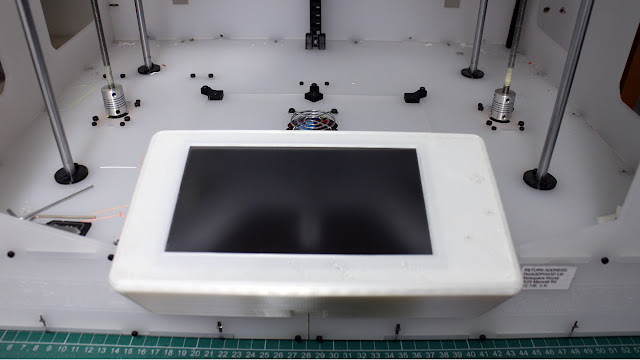 7" Full colour Touch screen interface - with it's own microcontroller, so you don't get any slow-down or drop in performance of the electronics by using it. 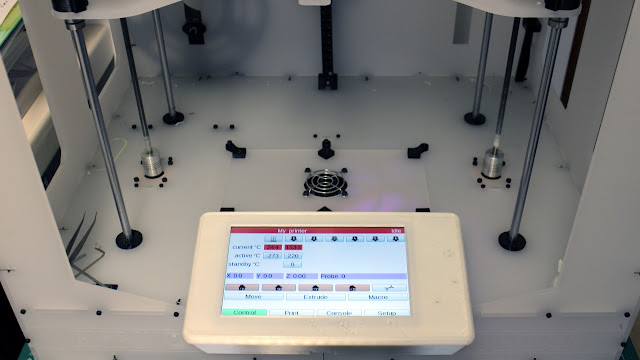 You can also watch this video over on YouTube in HD - you can subscribe to my channel too :)


At the same time I was contacted by Polyalchemy to see if I could try out a new type of 'modified' PLA called Elixir. That was also good timing as setting up any new electronics, firmware and mechanical system will use plenty of material in calibration and tuning for quality and speed. 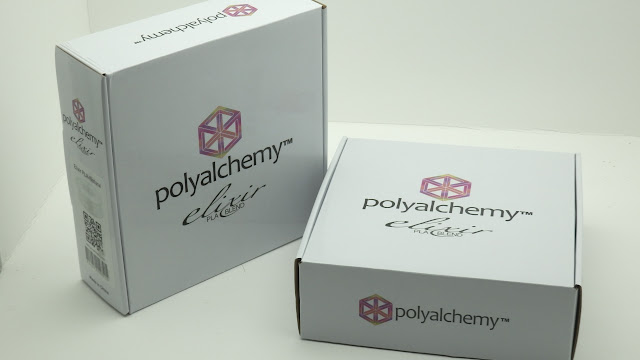 Quality packaging, well sealed and Made in China. 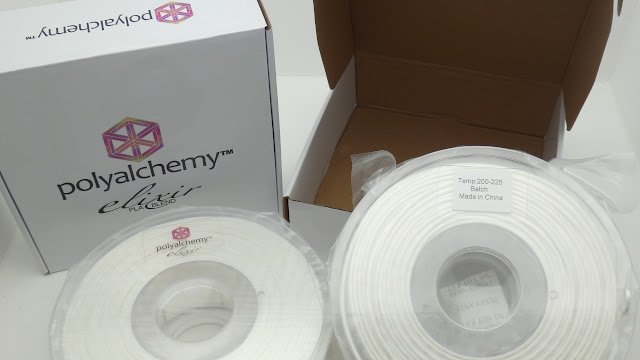 I get asked to look at 'new' filaments and materials all the time. If it really is something new or different I'm happy to take a look and feedback print results and compatibility etc. The one thing that I find disappointing is when I work out the filament is just re-branded from an existing supplier or labelled up as a 'new', 'special' or 'eco-friendly' product when it's just the same as already on the market. There is nothing really wrong with this, apart from when people don't tell me - after I directly ask. I do try to look out for materials that have had some of their own development or innovation - or just people who genuinely want to make something good for the 3D printing industry and not just to cash in. Polyalchemy were looking to make something a little different - and for it to be very silky.

I was sent various test-sample grades and colours of the Polyalchemy Elixir filament over the summer, testing and feedback allowed some final tweaking and they have now released the first of their filaments for sale - natural white, you can get it here.

Just to make it clear - I have no connection to Polyalchemy, I just found the material to be interesting and different from the everyday colours and finish of normal PLA. I tested it out on every machine, and had no problems with any of the different extruder systems or hot-ends from various manufacturers. It prints like normal PLA - I found a little extra heat would improve extrusion speed -I normally print PLA at 195 Degrees C. I ended up using Polyalchemy Elixir at around 208 to 215 Degrees C. 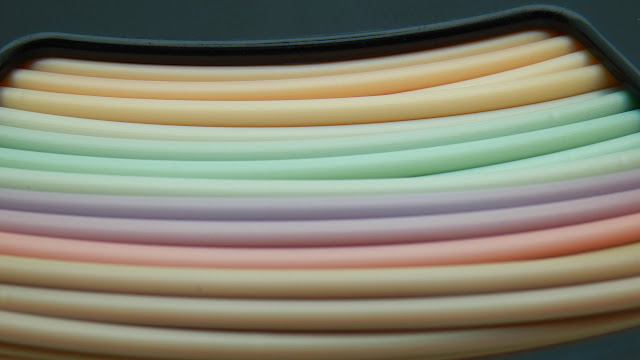 Some 'experimental' colours - very nice to print with. 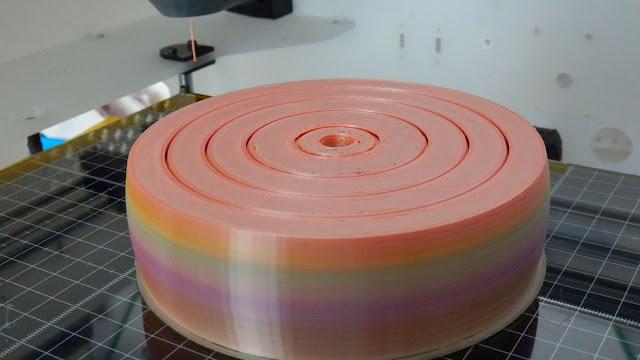 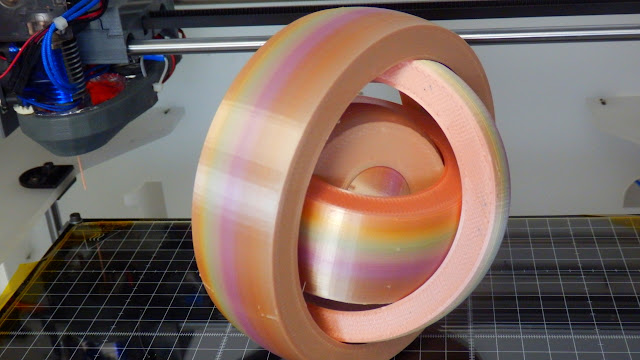 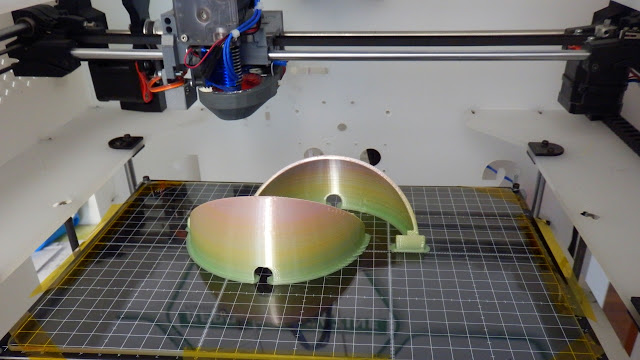 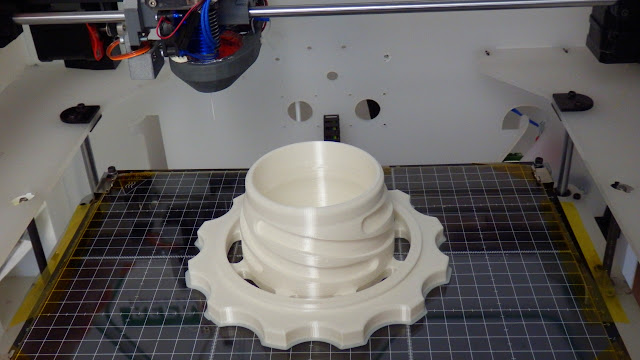 If you need something with a very smooth and silky finish then this may be a good material for you to try out. I can genuinely say that many of the parts I have printed in this material now have prime locations all around my house. It's been one of the only filaments that my entire family have all wanted to be on display. They look less like plastic prints and more like artwork or quality made products, for that alone I am delighted. 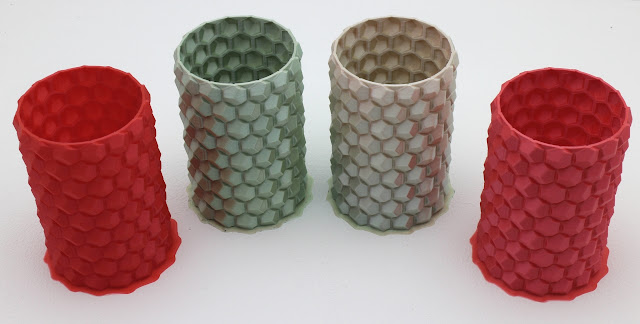 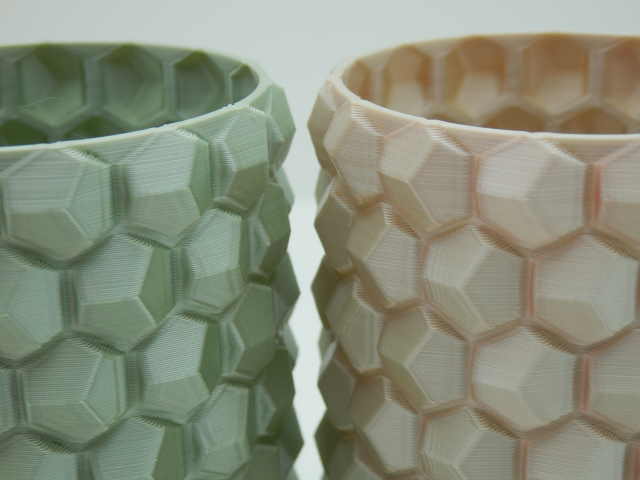 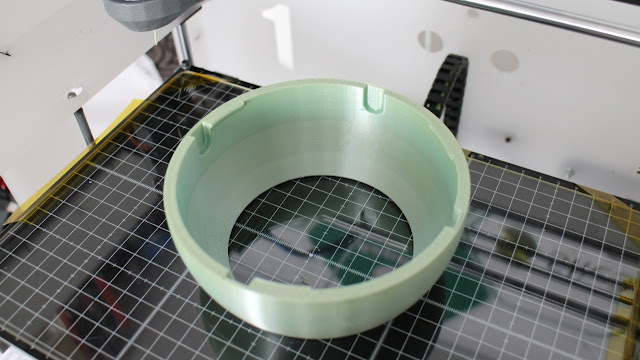 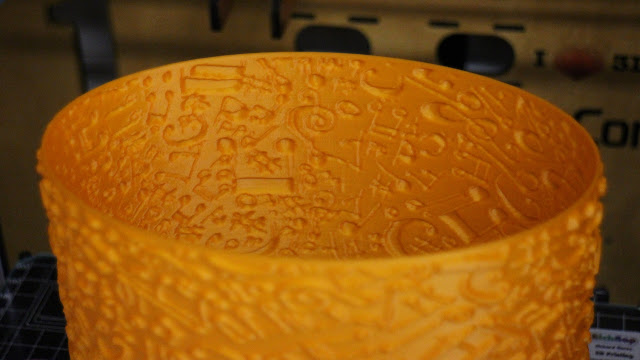 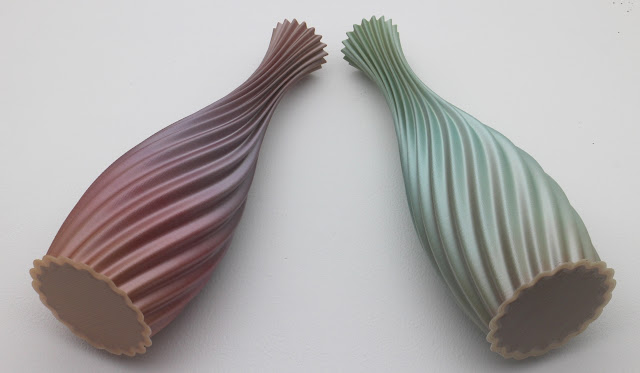 I'm going to keep an eye on what Elixir colours are released next. As you will see below and in the video I have tried out a few, some are nicer to look at than others, but the natural white is a very good starting point for beautiful looking and artistic 3D Printed models.

Back to the BigBox Duet Wifi upgrade -

My first task was to get the BigBox into a similar condition to my Steampunk BigBox - this involved a new heated bed, various modifications to the print carriage - now using my quick-fit version. 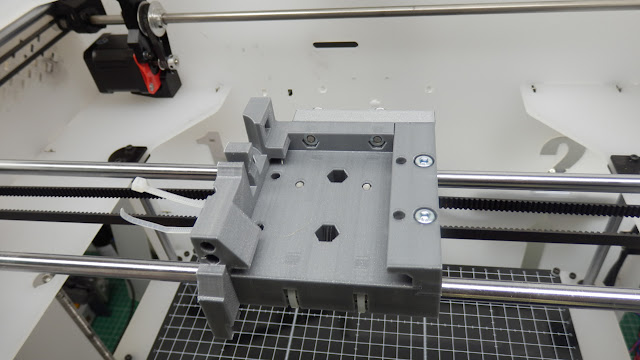 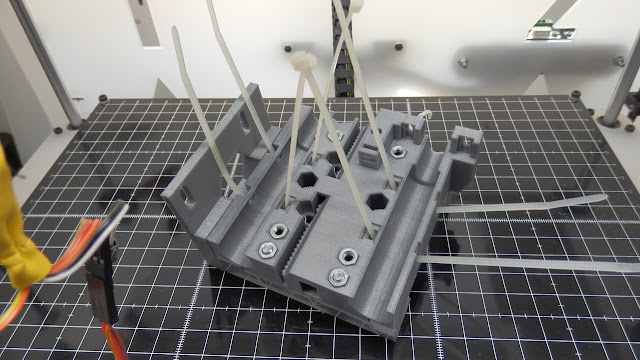 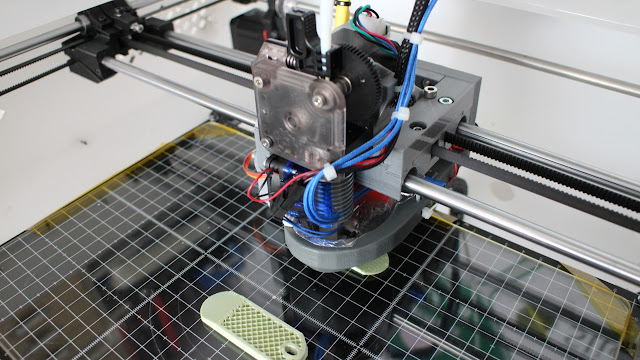 I only had an old style E3D Volcano heater block, so a quick modification to drill a new hole - added support for the new temperature sensing cartridges (therm / PT100 etc.) 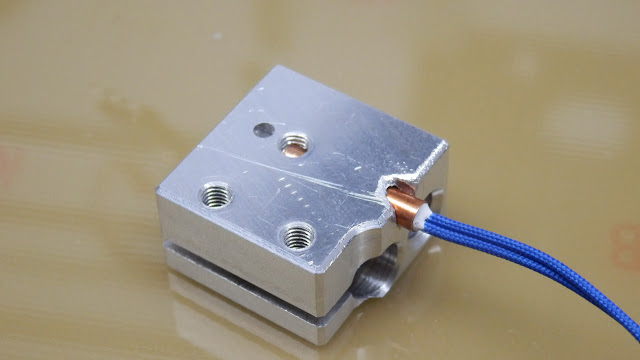 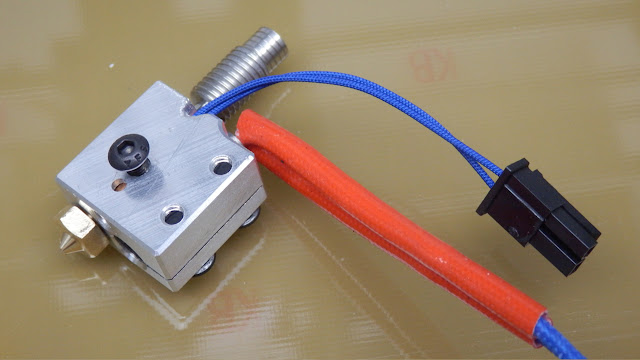 Some other changes included a change to 400step motors on all axis and some hand-modification of E3D Volcano heater-blocks to hold the new style thermocouple cartridges.

Wiring needed to be modified for the Duet Wifi electronics, but most of the changes were to remove the RUMBA and replace. 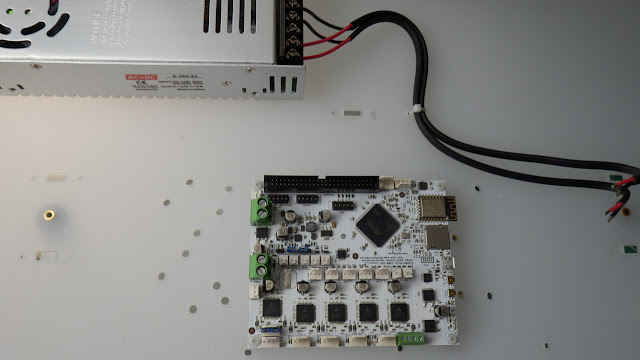 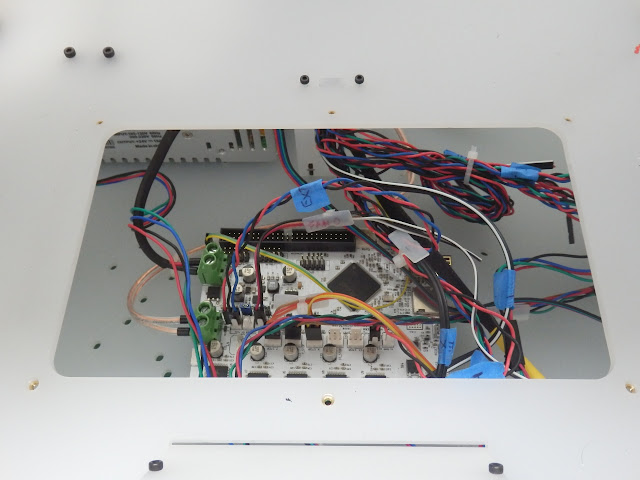 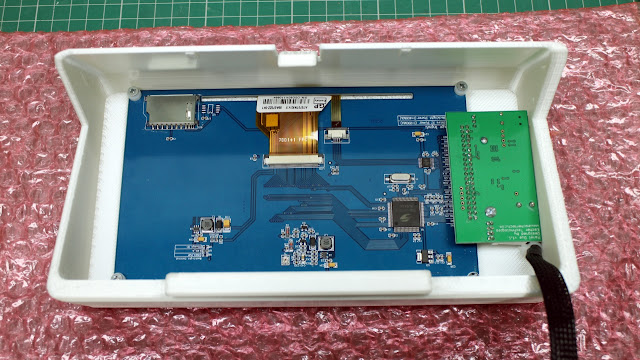 The Duet Wifi board has been a joint development with Think3DPrint3D and also Escher3D - David Crocker at Escher3D also designed and manufacturers the Infra-red bed sensor's used on the BigBox Printer. David has also designed the PanelDue LCD touch-panel screen for the Duet board. I found this LCD screen was a very nice upgrade indeed! 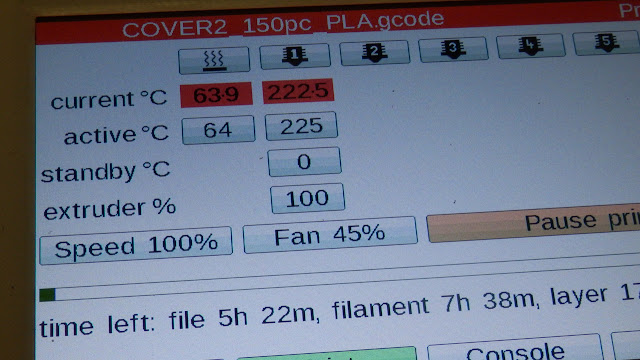 I'm going to order another set of DuetWifi electronics. The firmware is soon to get dual independent extruder control so I'm very tempted to replace the BCN3D Sigma electronics with the DuetWifi system.

This is one where it's good to watch the video, so please let me know what you think and I'll share more about the BigBox Duet Wifi Upgrade if anyone is interested.

Thanks for reading, let me knwo what you think and if you are interested in also usign the Duet Wifi or testing out Polyalchemy Elixir PLA?


Until next time, thanks for reading.