I have been printing with the Bath Prusa Mendel for 2 weeks now. It’s been a good learning process along with discovering more things about Skeinforge, high speed printing, hot-ends, and using ABS.
I now feel comfortable about the tool-chain and using the Prusa Mendel along with some of its limits, so I can now try a few more adventurous things in the coming weeks. 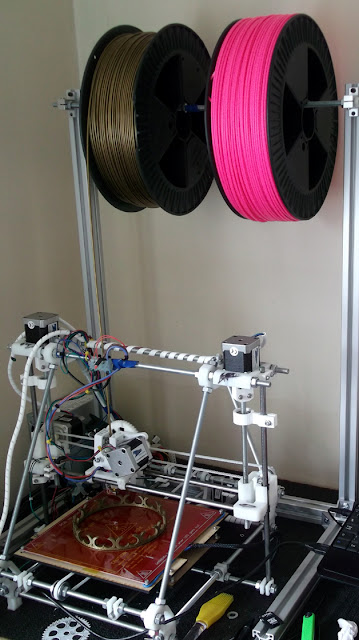 Below are some of things I have printed so far, and the issues I had along the way.
PLA works well, I have used 4 different types from 3 different suppliers, and they all have a slightly different extruding temperature and flow differently.
Just as I was getting to the end of the White PLA I had a hot-end failure jam, the nozzle was flexing down and catching on objects, on closer inspection the PTFE had split around the top and the PLA was jamming in the barrel. 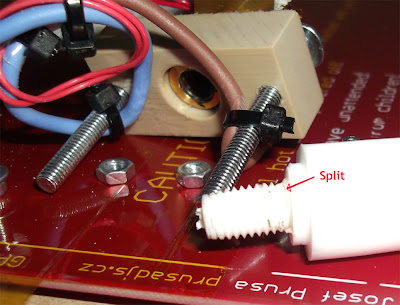 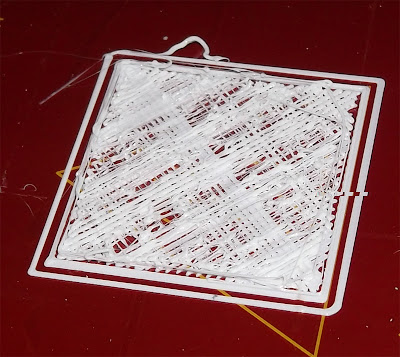 No change in spring tension or cleaning of the teeth seemed to fix it. 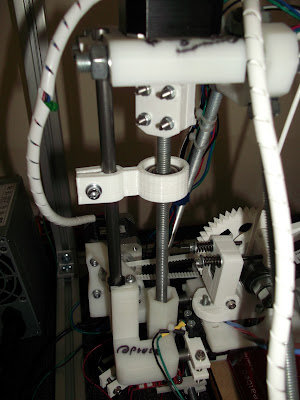 The White PLA from was used up printing upgrades, spares and experimenting with speed.
First upgrade was the Prusa Z Rod Constraint by ScribbleJ shown above. 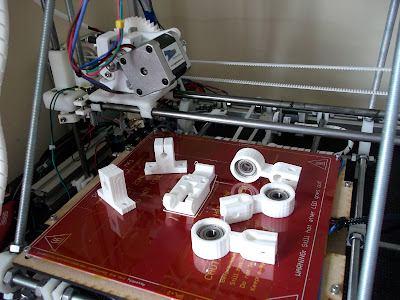 And a few of my own 8mm T-slot mounting blocks as I needed some for my other machine. 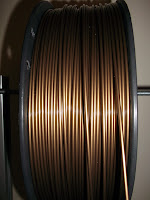 I then switched to Gold PLA and started to print a full set of upgraded Prusa parts. 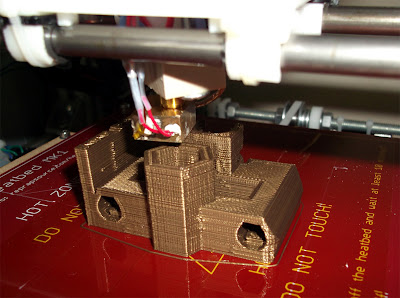 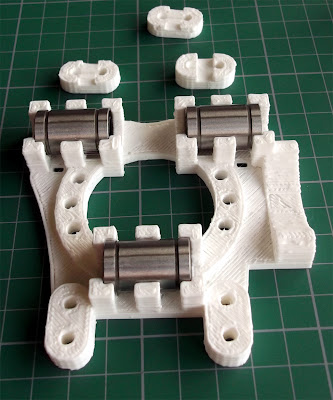 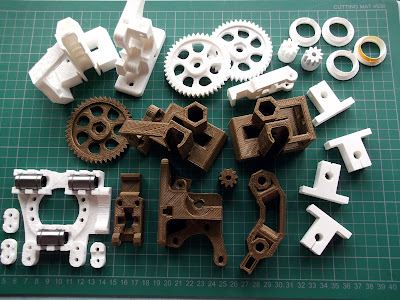 So after the first week I had managed to get it working well and print these.
I decided on Andrew dent’s MV6 frame and foot vertex pieces as I like the look of them and they are a little fatter than the official Prusa ones. 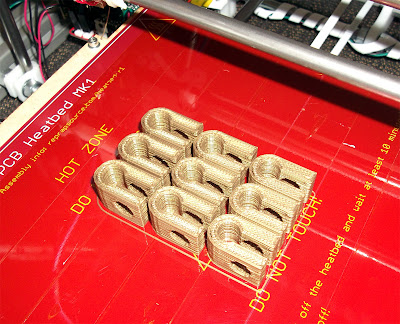 I was getting confident at this point and even did my first print using multiply in Skeinforge to get me 9 x M8 bar mounts printed in one go. 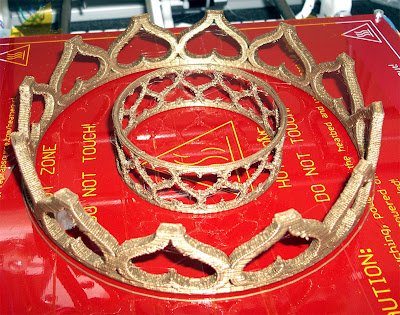 I printed a few fun things to keep my princess happy –
This is one of the exceptional Heart bracelets by MakeALot
And a 1.8 X scaled version of the Princess Heart Crown by syvwlch 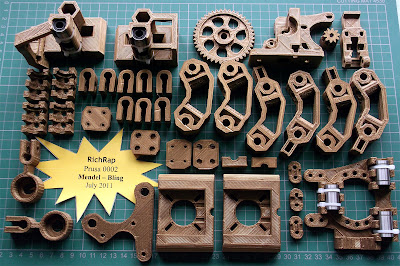 So a few days later I had the first child set of Prusa Mendel parts I decided to name ‘Mendel-Bling’ for building up my next machine.
At the weekend I decided to experiment with ABS. It’s the material I first started with on my original repstrap back last September and I was expecting it to be easier than PLA… it was not, but maybe that was my unfortunate choice of colour. 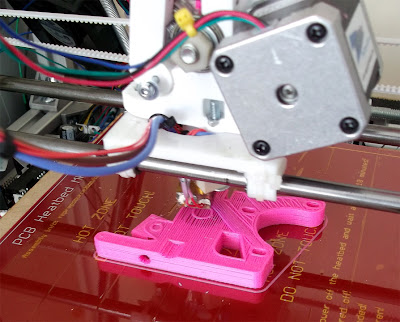 Sunglasses on, it really is that PINK.
As it was looking quite hard to get this ABS extruding I decided that my first ABS print should be another extruder, that was a good choice as shortly after printing this the PLA extruder melted. 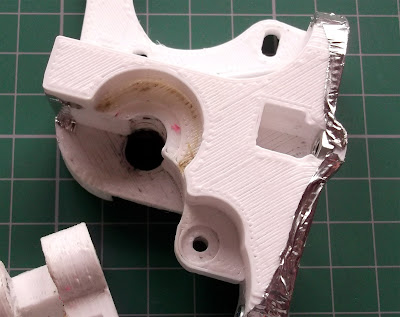 It’s good that I had an ABS X carriage or that would have melted also. 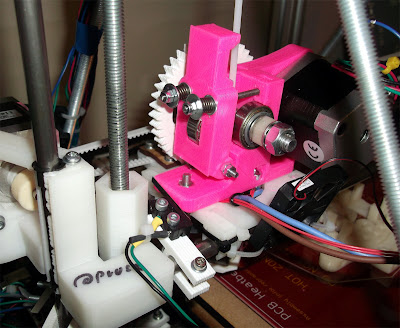 Extruder replaced. Still using PLA gears for good wear resistance.
When printing with the Pink ABS it needs 263 degrees C to extrude, I’m running it at 270 because of the following issue. - At 80mm/sec and 30% infill the Hot-end power is on 95% of the time and that quickly goes to 100% when doing solid infill layers while the temperature also drops 8-10 degrees, that’s right on the limit of the power I can get into the material with this particular hot-end, any faster and the extruder will jam and grind through the filament as the temperature drops too much. 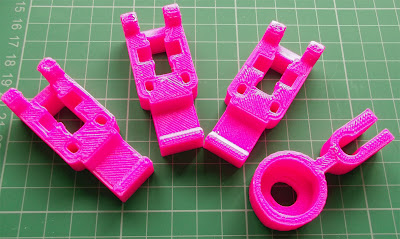 Take a look at this short video of a Pink print below, the hot ABS comes out looking slightly Purple and as it cools turns back to Pink, it’s really cool watching it print especially doing solid infill, this is my first coloured ABS so I don’t know if they all do that? 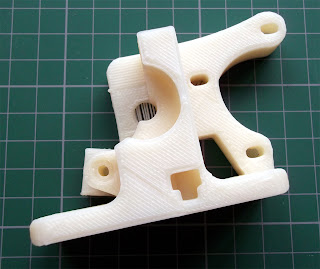 With Natural ABS I still see a temperature drop at 80mm/sec but not as much while the extruding at a lower (230) temperature.
So really I should slow down the ABS speed to be safe and then build a better hot-end that can deliver more power quickly into the filament so I can speed things up again.
I don’t see this temperature problem with PLA, but I have only gone upto 100mm/sec at the moment, I’ll wait until I have my Linear Bearing Prusa (Mendel-Bling) before going any faster. 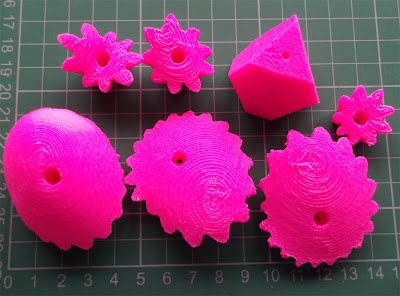 I have a puzzle to build up tonight, the Heart Gears by emmett
Thanks for reading,
Rich.
Posted by RichRap3D at 16:00