Warp Factor 9! - Printing the PP3DP (UP!) Bearing on My Repstrap

So maybe a bit over ambitious for a Repstrap with no Heated bed but I had a go anyway.
I really like the UP! Bearing - get it here - http://www.thingiverse.com/thing:3981 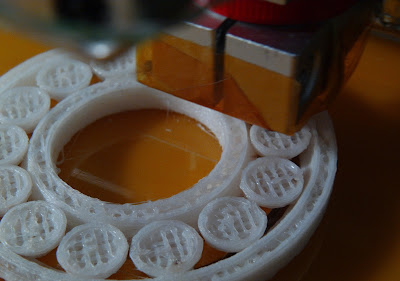 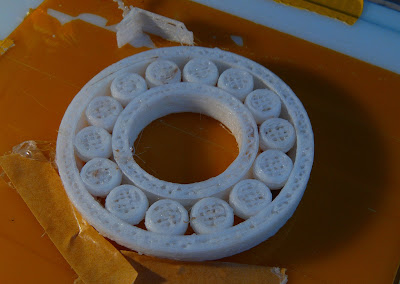 Starting to warp on the front edge - Note my use of double sided tape! in a poor attempt to counter the warp. 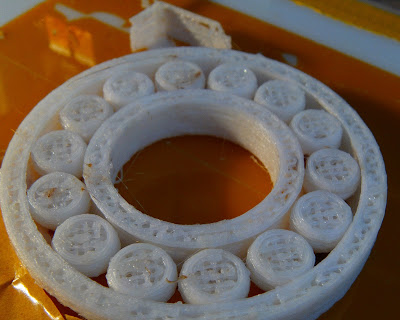 At this point the warp was going to destroy my extruder, so I reluctantly had to turn it off. You can see the bottom front edge getting more and more melted after each pass.
It would have taken about 2 hours 20mins to print in total, which is almost exactly twice as long as on the Up! Printer, I expect it could have be much faster as I had it set on 2 x Shells and a slow outline speed. it was also resetting to origin after every layer.

All the bearings are clear and I think would have moved and worked if I could have printed it all.


If anyone has a Mendel with a heated bed, I would love to see if this could be printed and if it worked afterwards. - Let me know...


If you want to try - You will need a support structure;  -
I made a 1.7mm high ring positioned under the balls to get them to the correct height in the bearing. For me the balls started to print after layer 4. The ring needs to be 58mm outer and 46mm inner. - Good Luck !


I really need to stop messing about and print some upgrades for my extruder, but it was lots of fun trying to print this.