This is another project inspired from childhood memories of Christmas and gifts (and Star-Wars).

I made up these all this before Christmas, as they were presents - I'm posting details and files now as a how-to-tutorial, I hope you find it interesting and experiment with 3D printed mold making too. 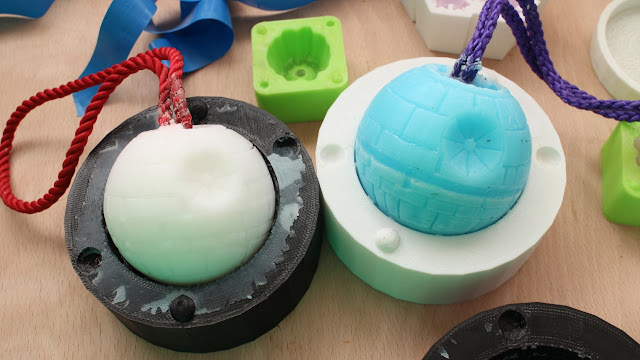 It's Christmas 1983 and I have been given yet another Soap-on-a-Rope. Everyone is still talking about the new Star Wars - 'The Empire Strikes Back'. I probably have some Star Wars based presents here somewhere... I keep on unwrapping... Oooh a Transformer, cool.

Many, many years later.

It's Christmas 2015 and everyone is talking about the new Star Wars - 'The Force Awakens' And I know some friends that will appreciate a Soap-on-a-Rope :) Transformers are still doing well too!

For anyone who does not know what a Soap-on-a-Rope is (did you not have a childhood?)  It's basically a soap shaped into an object or character, with a rope loop sticking out the top. They were very popular in the 70's and 80's - they were also very rubbish, lost all features of the 'design' after one use, always dried up and fell apart leaving soap shards or the rope just dropped out). But still, I remember them fondly.

The 80's were innocent times, most of the soaps were popular characters of the day or friendly shapes. If you google 'soap-on-a-rope' now - don't blame me for what comes up in the search!

I don't know quite why, but I even made a video - check it out below or over on Youtube in HD.

And so my mission was to produce a 3D Printed soap making mold in FilaFlex so I could delight some of my friends with the totally pointless 'Deathstar-On-A-Rope' - the 80's were so great!

Luckily for Death Star models, we have a nice design already made - Unfortunately many of these models are not manifold (meaning they are not a valid mesh and may have some errors, holes or intersecting triangles) that makes it tricky to further process. So first job was to 'fix the Death Star'.

The starting point was the Deathstar Christmas tree ornament by plainolddave - thanks Dave. 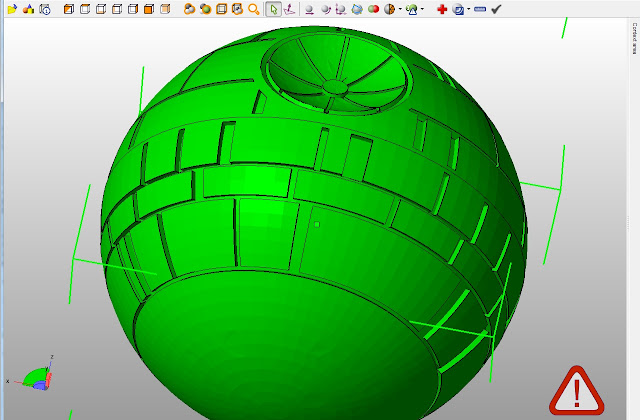 I checked the model with Netfabb (free) - but that was not able to correct all the problems, so Meshlab was needed to get this model error free. 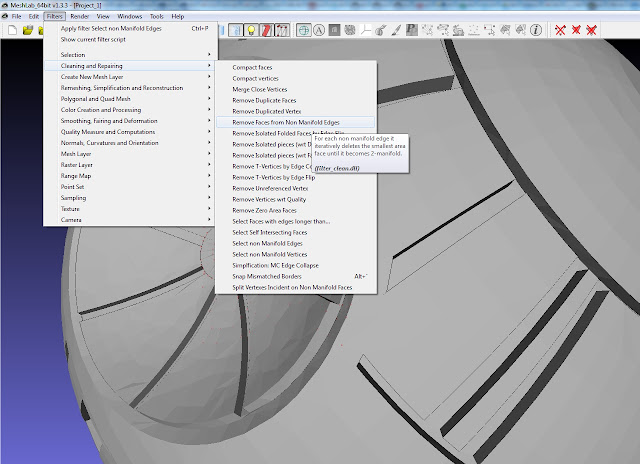 Meshlab (also free) has some powerful model checking and verification tools, these can also clean up your model and fix many common issues. It did not take long to get this model repaired and ready for the next step. 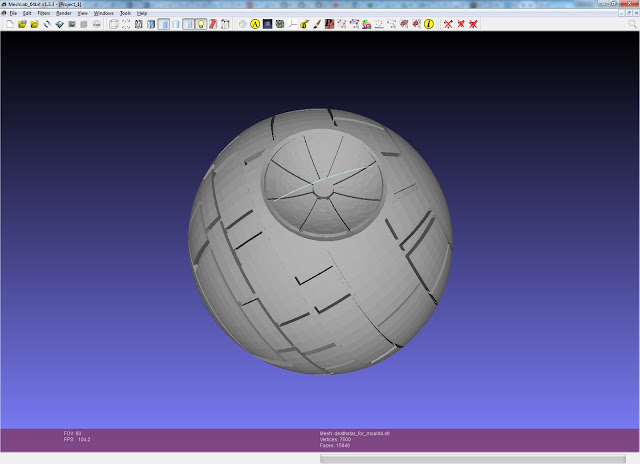 We now need to generate a mold model we can 3D print. We have two straightforward options -

Option 1) - As all 3D model meshes are a hollow 'shell' we can actually cut this Deathstar model in half, put each half in another 3D box and we have a very basic two part mold that could be used. Ideally you also need to add some locating pins and sockets on each half and a pouring hole.

Option 2) (much easier) - Use the rather fantastic - Parametric two-part mold generator for OpenSCAD by Jason Webb - This makes the job of cutting the model in half, adding location pins and a spout for pouring so easy it's almost automatic. 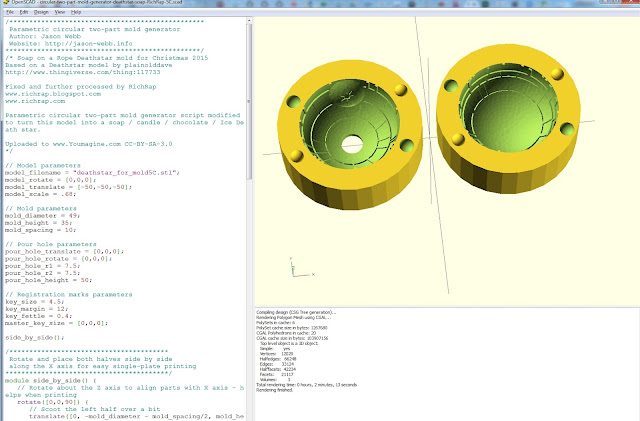 You will need to scale the defined numbers in the OpenSCAD script and make a few changes to select sizes suitable for your model file for the mold. You can also select a square or round mold and the location of the pouring hole etc.

But it's very easy - Just install OpenSCAD, and start by changing the model name being used as the master for the mold. Then you can start looking through the script and altering scale and size to match your object. You really don't need to understand programming, just read the comments in the script and experiment with changing the numbers, I have posted my modified script so you can see what this model required to get the molds correctly aligned.

You may find it easier to use Netfabb or another program to rotate or scale the model rather than try to make more significant changes to the OpenSCAD script. Keep things easy and experiment with the values, and you should end up with a two part mold (from almost any other STL model), you can print out and use. 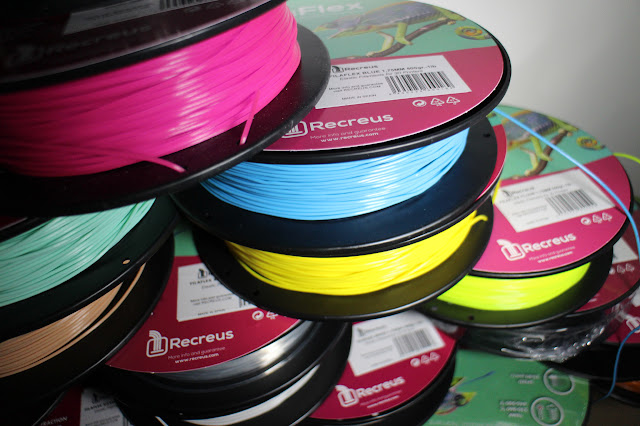 For printing, I strongly recommend using a thermoplastic elastomer (TPU) like FilaFlex from Recreus. This material is flexible enough to allow easy removal, but also holds it's shape well. It's also ideal for temperatures of melted soap, candle-wax and chocolate. Other TPU's are available - Ninjaflex, Semiflex and soft PLA all can work well for molds.

I recommend using the clear, white or a light coloured TPU, I had some very minor staining of the white soap base when testing out the mold using the neon green FilaFlex material. It was not as noticeable when using the clear soap, but you can still see a slight green tint. 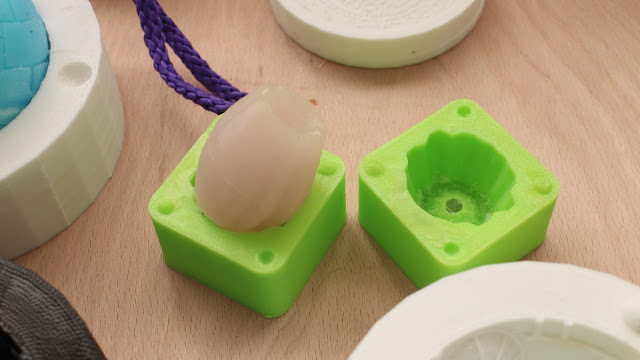 The FilaFlex molds were printed out using a BQ Hephestos V2 3D Printer, as this machine has a very good feed mechanism for soft rubber materials. (it's the best I have found so far).

I used a 12% infill and two perimeters with a standard 0.4mm nozzle running at 243 Degrees C and 45mm/second print speed. You could use less infill, but this makes for a strong mold you can use over and over again. 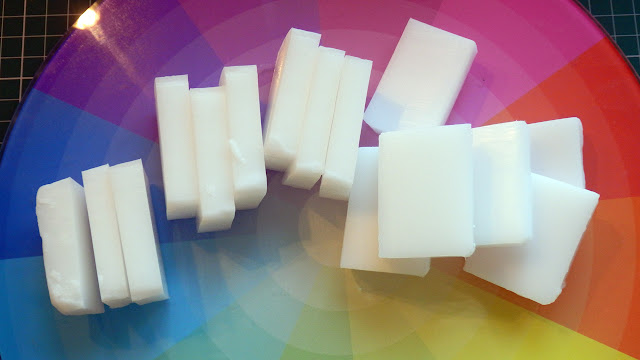 Finally I used easy pour soap, you can buy it in slabs or ready cut into chunks, just heat it up as you would chocolate (but at around 75 Degrees C), and pour into molds. It comes in clear and opaque, the opaque is less tacky and seems to help highlight more details. 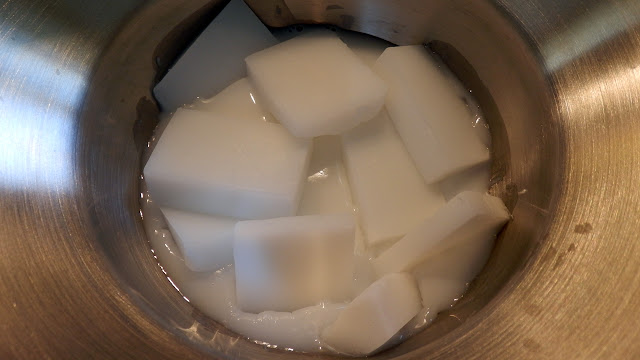 You can also experiment with colour - if you want a grey Deathstar, use equal parts of red, blue and yellow colouring. 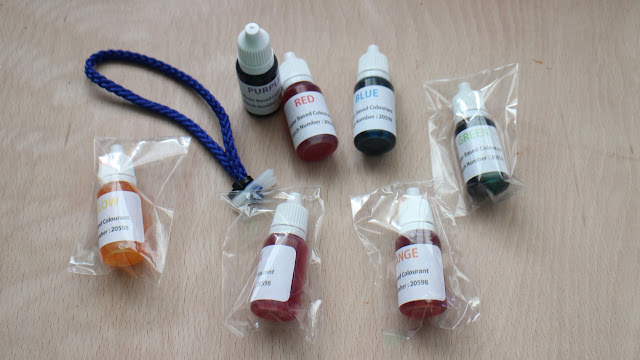 Consider adding some glitter if that takes your fancy or natural additives like lavender, vanilla, peppermint etc. 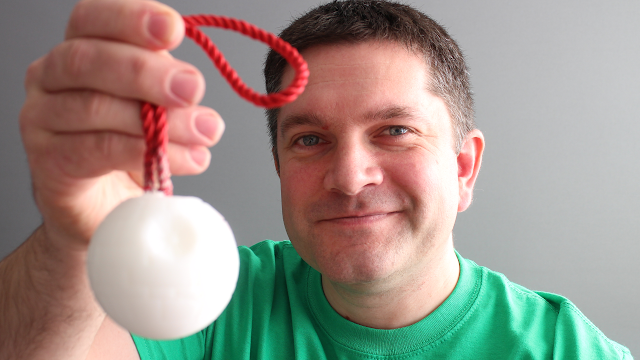 Christmas is over, but this gift would be ideal for a birthday. We also have Easter, so that's just crying out for a chocolate egg shaped exploding Popping-Candy-Deathstar! Have fun :-)

You can find all the source and model files including the modified OpenSCAD script for this project over on my Youmagine page here.

May the force be with washing you!

Thanks for reading, please let me know what you think and if you want to see more posts like this.