Let's discuss the fear of 3D Printing filament tangles.
And how best to avoid them.

Before I bore you all to death with more MasterSpool related content, this is probable going to be my last post about the subject for quite a while. The project is in a good place, with users and manufacturers deciding to get involved. I want to see how it evolves, but more importantly I want to get back onto all my other projects, that got put on hold for the last few months. 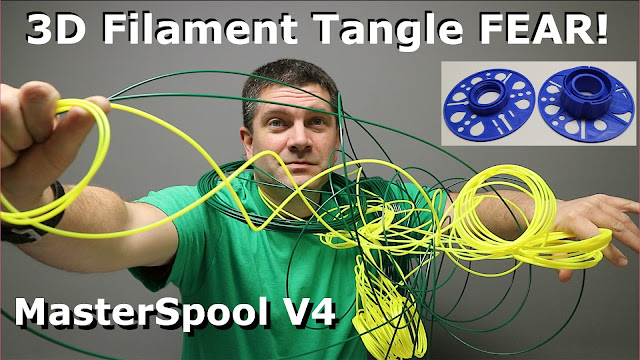 This post is also an overview of the MasterSpool Version 4 update - see below and in the video.

Future projects -
I'll have some new developments, machines, materials, projects and ideas to share with you in the coming months, I hope you continue to read, view and generally enjoy what I'm doing here with 3D Printing.

I'm trying hard to branch out and get involved with even more aspects of 3D printing this year. 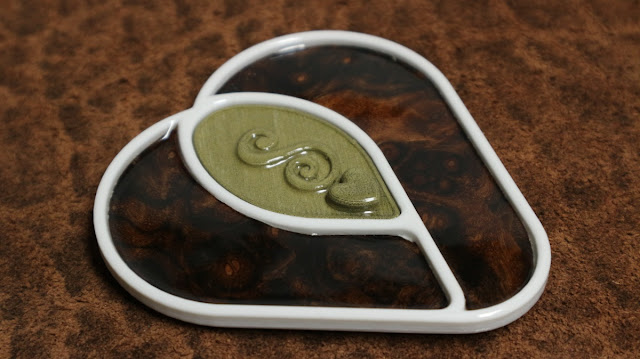 Next time I'll have a number of Valentines projects I did with the whole family. It was really great fun exploring with 'mixed media' and getting everyone involved. 3D printing plays a big part, but it's just one of many processes we used for making valentine related useful objects. - more on that soon.

The one thing that the MasterSpool project has taught me it that quite a lot of people (that post comments on YouTube) have a lot of fears of things not working, failures and generally expect new things to probably be bad (and no use to them unless it saves them money!).

In the video I want to talk about MasterSpool V4 and also one of the last remaining fears people seem to have about using 3D printing filament from a refill system. - The almost irrational FEAR of tangles.

I seem to have spent just as much time talking about why it's okay to try out new things, and that it's going to be fine, as I have actually designing, using and talking about MasterSpool.

But in many ways, I guess that's to be expected - this is starting to disrupt things a little... 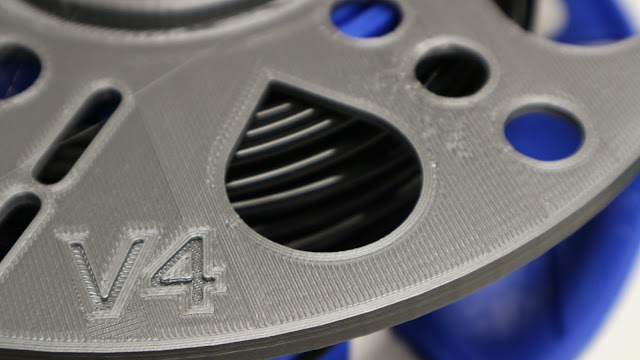 V4 was driven from and for the community - thanks to everyone that has supported the open standard and provided feedback, advice and tested out the system. 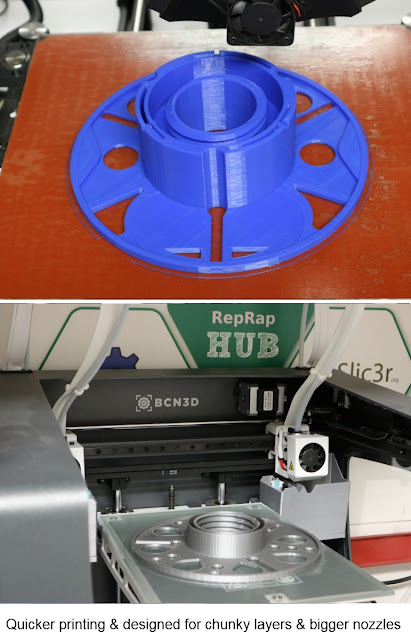 One of the first modifications was to make V4 easier to print with bigger nozzles and chunky layer heights - the text on the spool has been modified to allow nozzles from 0.4mm to 1.2mm to be used. 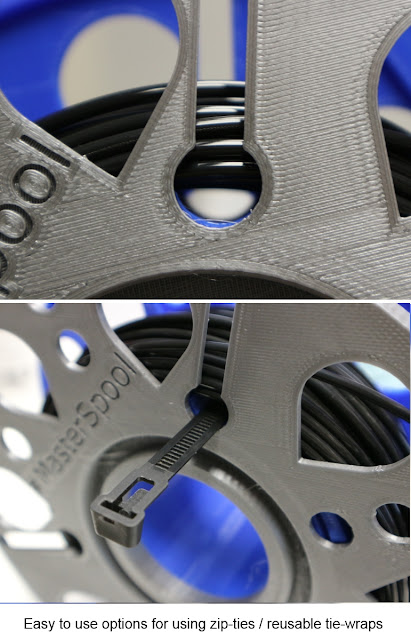 First the three positions for the tie-wraps were opened up and cut into the side of the spool - this makes it much easier to fit and remove the refill coils. 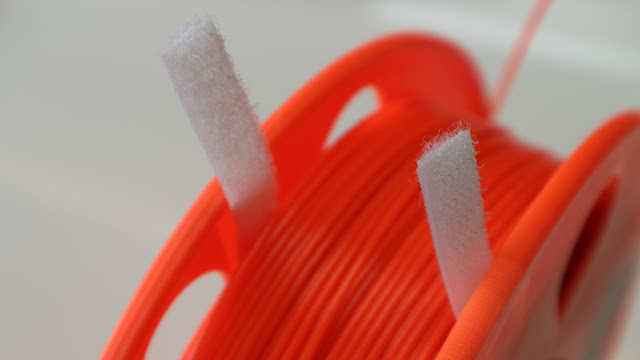 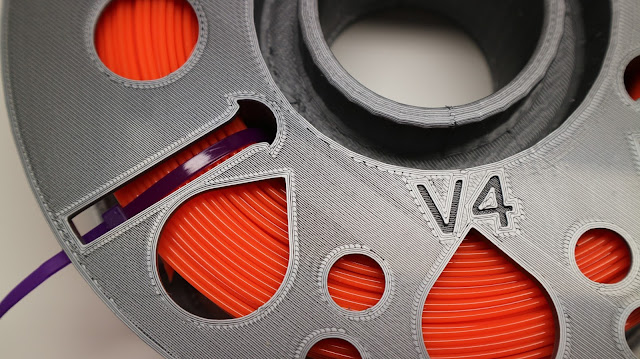 You can use normal tie-wraps (zip-ties) or reusable tie-wraps as shown in the images above. 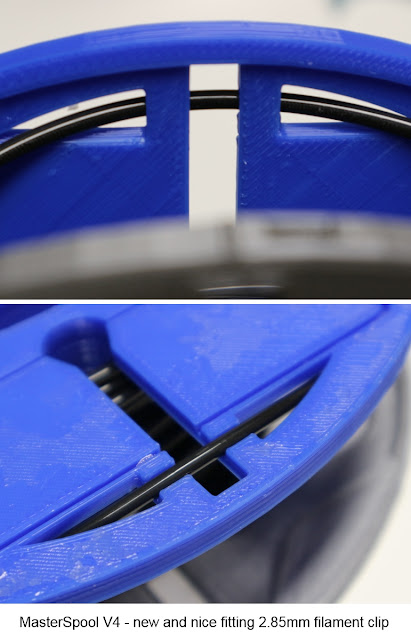 More 1.75mm filament end storage was added - now three locations around the spool. And the 2.85mm / 3mm clip was also modified to provide a spring hold of the end - allowing stacking without interference. 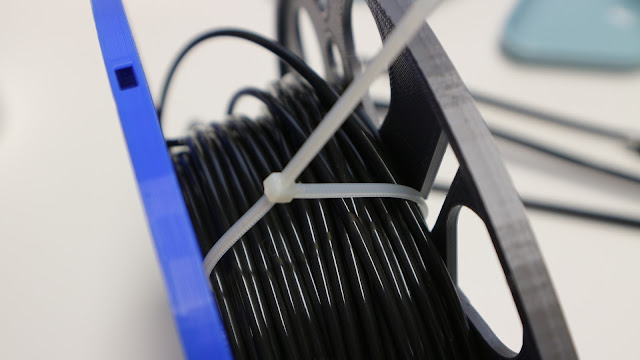 The sides of the spool were also flattened to allow bearing mount spool holders to work well.
Generally other rounded edges were also removes to speed up print time. 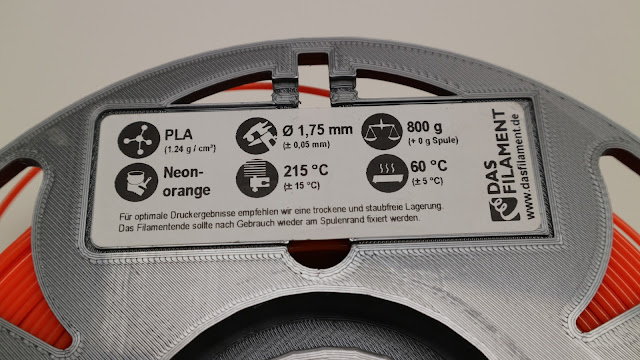 The label position is still in Version 4 - this seems to be quite a useful aspect to the refill spool system.

Many other smaller changes have also made the spool stronger and faster to print.

Print settings I use -

The second most asked question -

Where Can I buy refill coils for MasterSpool -

You can buy Refill filament coils from Das Filament in Germany (they do worldwide shipping) -
https://www.dasfilament.de/filament-refill/

I have no affiliation with Das Filament, the link is provided as people are constantly asking me where to buy MasterSpool coil refills from ! And be quick - they seem to sell out really fast after a new batch is added.

The third most asked question I get is about the filament refill coil dimensions, I have now added an overview and dimension PDF document to the V4 downloads -


Not bored of MasterSpool content?
Then check out these other opinions from more makers here -

Tom has a great vlog on the Masterspool (V3, but it's still good fun to watch) -

C.R.T also posted his video on the V3 MasterSpool - the same day I updated to V4 -

If you have any feedback at all, do leave a message, comment or discuss it with me over on Twitter. Feel free to use the hashtag #MasterSpool - I'll try to catch them for an update post in the future.

Thanks for reading, see you next time.

My profile and posts over on Google+

Files and designs shared on YouMagine

Files and designs shared on Thingiverse

Files and designs shared on GitHub

Files and designs shared on Repables